At one point on my OkCupid profile I described myself as something like vanilla ice cream with white chocolate and raspberry swirls, aspiring to be drizzled in butterscotch and meringue pieces.

I’ve got a fun and creative side that has only started to be explored sexually in the last year. There’s all different shades of kinky, its true, and a question that keeps coming up for me is- am I kinky? 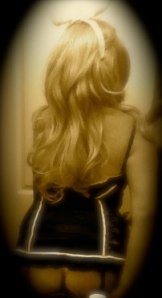 Rope- I love it. There’s something fun about getting stuck, and its very liberating to experience a freedom within that. Blindfolds, a change in sensory awareness are also fun. And I love to dress up, whether its with the intention of having sex, or not. Chains and collars and whips and paddles and all that jazz? That I’m not so sure about. I mean, it might do something for me. I can’t say I’ve tried everything out yet (and I’ll try anything twice before I decide if its for me or not). The whole handcuffs thing and sexy oil massages…  the only time I really really tried the handcuffs and massaging thing was with my ex husband, and, if you’re one of my twenty adoring hardcore fans, you’ll have read about our unsuccessful ventures into bondage in a previous post. That stuff just doesn’t get me going. And, whilst I’ve often enjoyed being talked dirty to, its a stretch for me to think of anything dirty to say back to my partner- mainly because my brain seems to loose its language capacity when I’m really enjoying myself!

Really, I think I’m more of a tantric kinkster. If, that is, that’s a thing. If its not, I’m making it a thing, as of now.

I went searching at a local new age bookstore for books on Sacred Tantra. All the books I found were either too ‘hippy dippy’- with photos of hemp wearing new age rainbows-and-light folks dancing and leaping through their chakras pre and post orgasm (dude, I can do that already, I don’t need a book)- or they were all science and no spirit- with diagrams and photos of positions and of how the breathing patterns should move and for how long you breathe into each centre, like a scientific manual. Actually they weren’t too dissimilar to the Kama Sutra. If you ever pick up the original text of the Kama Sutra, I dare you to read a bit out loud with your best David Attenborough voice- its really just a scientific commentary on human mating practices, rather than the actual nature of intimacy and energetic connecting that happens during lovemaking. I did find a couple of interesting books that attempted to put a neuvo-spiritual spin on the tantric spiritual and sex practices, with some simple excercises to try out (like eye gazing with your partner during intercourse) and yet lacked the spiritual backbone, and so they skipped over what, to me, is the real gold in the treasure trove that I feel sure is there.

I want a tantra that is sacred and sexual, that’s grounded and enlightening, that teaches you about your body and soul, as well as reveals your partner’s body and soul. Teasing and intimate, present and fun.The kind of pure living-in-the-moment and breathing-creativity that grants you the experience of orgasming with the whole universe. Delicious and decadent. Liberating lovemaking.

I asked Orion about this conundrum of mine. He’s far more experienced in this stuff than I am- hence why he’s my personal rope tutor.

“There’s only two things you need to be kinky,” he said, “Presence, and Imagination.”

I think I can do that.

Perhaps one of my strengths as a lover is in being creative, and in applying myself to relationships much the same way I do to my creative endeavours- constantly seeking out my edges and daring to traverse them in whatever way works the best for me. Courageously catapulting myself into uncharted territory of tantalizing tantric tenderness.

So here I am, forging my own style of tantric kink.

That might need to be a blog all of its own…. 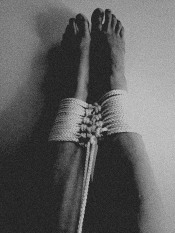 I’ve always had a thing about knots.

Learning to tie my shoelaces in school took forever- I had velcro till I was in grade 4 or 5. And I had a pink bag for my lunch that had a pull tie opening. I was always worried something might fall out so I would tie it again and again and again. In sewing clases I could never figure out how to do those nice flat sewing knots, and so would tie at least a half dozen twists to create my very own Gordian Knot.

I once tried to tie myself up, when I was in high school. That didn’t turn out so well. I got stuck. My mom freaked out about it.

On one occasion, again, in high school, I tried to tie up my best friend. In a purely innocent kind of way, naturally.

When Finn and I were married, I once suggested that we try out bondage stuff. I wanted to have my hands tied above my head. I wanted to be blindfolded, to feel out of control and have to surrender totally and utterly. We tried it, and it just didn’t feel right. He was too aggresive, and very uncomfortable with the idea of tying me up. He seemed to struggle with the idea that I was enjoying it. That was our one and only experiment into bondage.

Since then, I’ve had a few lovers who have been willing to play with it. I’ve been handcuffed, tied, blindfolded. I even got to be suspended once at a big party- that was fun, even if I was drunk and more-than-slightly high.

But I really really wanted to experience more.

I wanted to experience rope.

A few weeks back, during a long conversation with a few friends, Orion expressed how he missed having play partners to tie up. My ears perked up like a cat who just heard the can opener twisting around a fresh tin of friskies. We were good friends, like old comrades who had been through some epic adventures and shared a lot of Life stuff with one another, we are on the same page about so much in terms of spirituality and personal growth, but I knew him as more of a light and rainbows kind of person. He played with rope?

Suddenly all the fleeting and ignored what if  thoughts I’d had about him went flashing through my head, and then all the fantasies about rope, and then the little moments of flirtation that had started occurring between us, and I knew I had to find a way to bring it up with him.

I let a week go by. We were doing the summer hanging-out-with-lots-of-friends thing and that just didn’t seem like the right time to bring it up. I was sneaky about it. I just casually dropped it into a facebook chat conversation one day. The next day we met up in person to talk about it more, and the more we talked, the more we realised we had some really wierd kinks and fetishes in common.

Orion is a ‘switch’. Meaning he can dominate one moment, and be completely submissive to me when I want to dominate. I’ve always been able to be more dominant with women, but never with guys. Not for lack of wanting to, I don’t think, but just because I never found myself with men who were okay and comfortable with that.

He’s helping me to get a whole lot more comfortable with that side of myself. And, there’s something quite fun about being able to tie him up too. 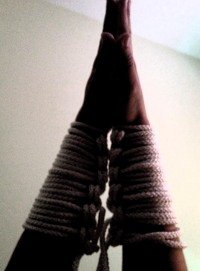 Yes, I’ve been learning rope. And we’ve been playing, in this crazy rope and tantric dance, in my tiny little bedroom. And after, we cuddle, and hold eachother, and laugh and giggle hysterically at all of this and talk about spiritual shit and relationships and the singleish life. Its one of the most comfortable and creative sexual partnerships I’ve ever experienced, I think perhaps because of that long standing friendship. I don’t know if most ‘play partners’ share pancake breakfast in the morning, but the fact that we can share a night and morning together is deeply nurturing, and something that was missing in some of my other recent relationships.

Its bondage and spirituality all rolled into one diabolical exploration of intimacy, sexuality, and friendship. And its awesome.

And also, I think its possible I might now be slightly better at tying my shoelaces than I used to be.

Learn more about my coaching work and book an appointment with me!

your generosity helps support this blog

All content © Radical Relationship Coaching 2016. No reproduction or translations without author permission. To contact the author please email melina@radicalrelationshipcoaching.ca